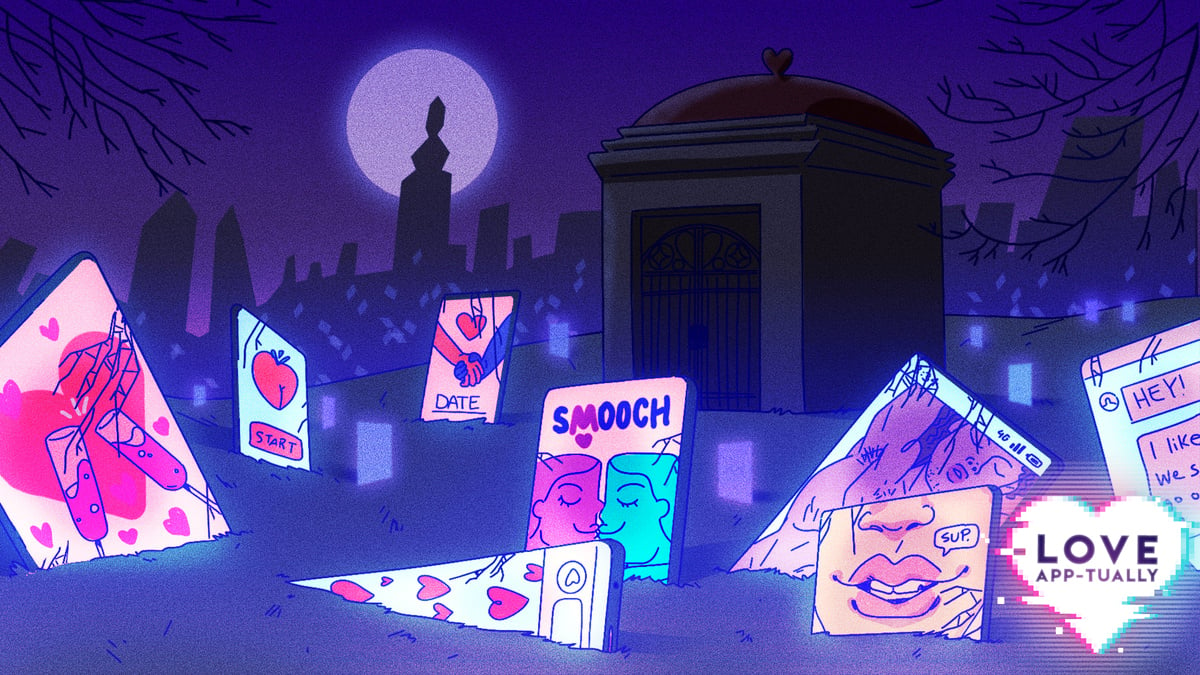 In our Love App-tually series, Mashable shines a light into the foggy world of online dating.

The internet is one big graveyard of abandoned apps and dusty old websites. With the explosion of dating apps in the last decade — and dating sites before them — it’s not surprising that some have withered away while others reached mass success.

Dead apps are a window into our online dating pasts. They show our desire to find likeminded people, and our eagerness to log on in order to find love. That remains true now: The dating app market was valued at around $7 billion in 2020, and that number is expected to balloon to $11 billion by 2028.

Only popular contenders like Tinder, however, have gotten significant pieces of that pie. With new apps popping up to snatch some of that revenue for themselves, will the big players squeeze them out? Or will those apps eventually end up in this same cemetery?

Time will tell — but for now, here are nine dating sites and apps that died. RIP.

Facebook Dating launched in 2019, five years after founder Mark Zuckerberg claimed (in now-leaked emails) that Facebook was a better dating site than Tinder. Well, that hasn’t exactly come to pass: Facebook Dating has thousands of active users, while Tinder has millions.

Facebook tried again with Sparked, a video speed dating app that launched last year. If “video speed dating” doesn’t sound that enticing to you, don’t worry — it didn’t to many others, either. Meta, formerly known as Facebook, shut down Sparked less than a year after its inception. An email to members read, “Like many good ideas, some take off and others, like Sparked, must come to an end.”

As queer news site Pink News lamented at the time, “now we’ll be single for all eternity.” At least there’s Grindr.

Hater made waves back in 2017 as a sendup of Tinder and other apps. This app’s niche was connecting people through things they despise. App founder Brandon Alper pitched Hater on Shark Tank in 2017 and received $200,000 from billionaire Mark Cuban, but the following year Alper told CNBC that Hater wasn’t making money.

Hater’s Twitter hasn’t been updated since 2018, and as of publication Mashable couldn’t find it in Apple’s App Store.

HowAboutWe was an innovative dating app in that singles snagged dates by suggesting activities with each other, i.e. “How about we go out to dinner?” HowAboutWe branded itself as an “offline dating app” for this reason, and was even touted to “reinvent internet dating” by GQ when it started back in 2010.

As is a common story in this graveyard, HowAboutWe’s demise was due to a buyout. Match acquired HowAboutWe in 2014, and the site is no more.

Snack is a dating app for the TikTok generation

While apps like Tinder garnered a reputation for hookups, Spoonr set out to help you find a more PG snuggle. First called Cuddlr, the app launched in 2014 to help people find platonic cuddle buddies. “Tens of thousands of successful cuddles later,” however, Cuddlr shut down in 2015 and rebranded as Spoonr months later.

Still, the general public didn’t see the need for a snuggle buddy app, and Spoonr closed in 2017 with a tweet: “It was fun while it lasted! SPOONR is now closed! Hugs.”

Dating app Siren launched in 2015 by two women of color to “fight the swipe” of dating apps created by men. Instead of swiping, Siren posed daily questions for users to answer and seek potential matches based on whose responses they liked.

Siren shuttered in 2017 with a blog post. Co-founders Susie Lee and Katrina Hess claimed that investors didn’t complete their payments, and the app ran out of money. In an interview with GeekWire, Lee called out Blackrun Ventures specifically, and Blackrun denied these allegations but “respect[ed] their decision.”

The original goodbye blog post now redirects to an article by local paper Cleveland Scene about the 14 best hookup apps, but the letter is preserved on GeekWire.

Oh, Craigslist Missed Connections. Gone too soon. What once was a goldmine documenting passing glances and near meet-cutes is now, as Mashable’s Chris Taylor observed, a “shadow of its former self.”

When Craigslist axed its Personals section in 2018 as a sweeping response to anti-sex trafficking legislation FOSTA-SESTA, Missed Connections picked up the slack. Unfortunately by then, the section was — and is still — past its heyday.

For those who miss ye olde Missed Connections and happen to be queer, you can write to your missed connections on the dating app Lex (a photo-less dating app inspired by newspaper personals).

A site with the same fate as Craigslists’ personals, Yahoo! Personals shuttered in 2010 when it merged with Match. Like then-competitors and more modern apps, Yahoo! Personals required you to make a profile and, after a free trial, cost anywhere from $15 to $30 a month.

A two-for-one, GreatBoyfriends and GreatGirlfriends launched in 2002 by then-Elle Magazine columnist E. Jean Carroll (who later accused former President Trump of assault) and her sister Cande Carroll. The concept was born out of meeting a partner through word-of-mouth: People would “recommend” their “great” exes for others to date. The Carrolls founded the sites on the basis that everyone knows a “great catch” to endorse.

GreatBoyfriends and Girlfriends died after wedding site The Knot acquired them in 2005.

These sites and apps began with the hopes of connecting people, and they’re sadly no more. While we can’t predict what current apps are doomed to a similar fate, we can mourn the ones already here.