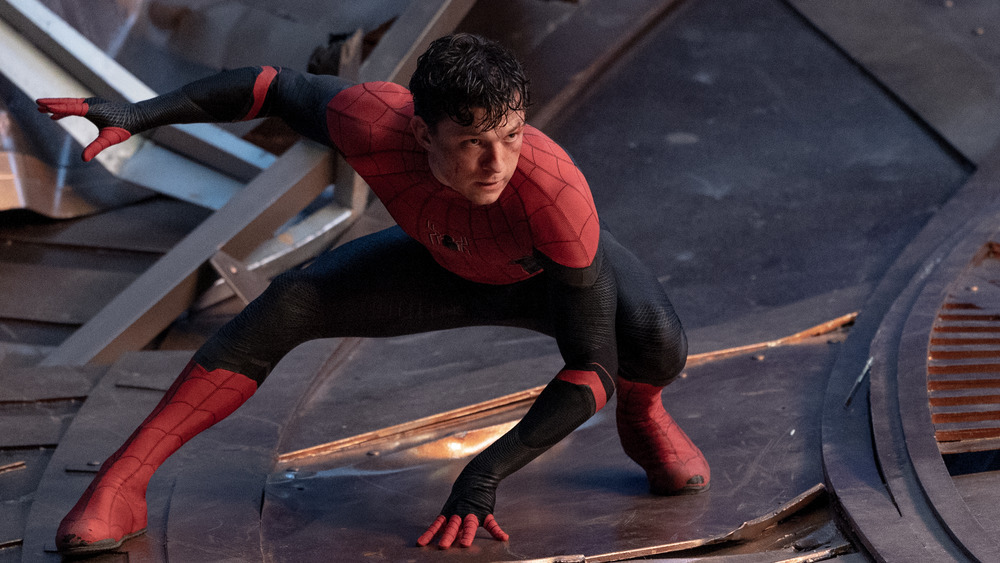 For months, fans have been speculating that Spider-Man: No Way Home would web together all three leading men who’ve played Peter Parker. When trailers hit teasing the likes of Alfred Molina and Jaime Foxx would be reprising their roles as villains from Sam Raimi’s Spider-Man and The Amazing Spider-Man film series, it seemed certain. And yet, throughout an extensive press tour of tick, tick…Boom!, former-Spidey Andrew Garfield insisted that he was not sliding into that suit again. Welp! He lied. Or acted. Whatever. We’re over it because yes, Andrew Garfield, Tobey Maguire, and Tom Holland appear together in the MCU’s latest Spider-Man movie. And we’re over the moon about it.

Okay, so let’s dig into all the goodies I couldn’t get to in my spoiler-free review. The setup of Spider-Man: No Way Home sees Peter (Holland) facing off against villains who fought other versions of himself in other multi-verses. This gives long-time fans a rush of nostalgia along with the thrill of seeing Willem Dafoe go goblin once more. But even more thrilling was the second act portal reveal that brought the other Spider-Men back onto the scene.

SEE ALSO: A refresher on the villains in ‘Spider-Man: No Way Home’

It’s great fun to see all three Spider-Men whipping around the Statue of Liberty with their web slingers and daring-do! But Spider-Man: No Way Home did more than give us three times the high-flying action and zippy quips. This movie gave this brotherhood of heroes the space to hang out and heal.

For fans, it’s a deeply nerdy pleasure to hear Tobey-Spidey musing about his biological webbing, while Tom-Spidey and Andrew-Spidey are agape in scientific awe. Likewise, it’s a cheeky joy to see Andrew-Spidey tease Tobey-Spidey about his “youth pastor” disguise. And when they all group hug? Come one! The warmth of that bro bonding was contagious.

This movie gave this brotherhood of heroes the space to hang out and heal.

More powerfully though, Spider-Man: No Way Home didn’t just seek to give the villains of the previous Spider-man movies a second chance. It also gave its heroes a chance at closure. When Tom-Spidey is grieving for the recently murdered Aunt May, the elder Spider-Men advise against wrathful retaliation. They share their stories of seeking vengeance and warn how hollow and hurtful the results were. More pointedly, Tobey-Spidey intervenes in a battle between Tom-Spidey and the Green Goblin, who killed the latter’s May. For his troubles, Tobey-Spidey gets stabbed by the ferocious fiend. But he saves the Green Goblin, and by extension his former friend and idol, Norman Osborn. It’s a moment so satisfying that he can smile through the physical pain of goblin blades to the back.

Most moving though was Andrew-Spidey’s second chance at the catch that killed. In The Amazing Spider-Man 2, his epic love story with brilliant Gwen Stacy came to a heart-breaking end, when his attempt to save her from a fatal fall instead snapped her neck. The chemistry between Andrew Garfield and Emma Stone was so hot in those movies, that this death might well have been the snap that broke the series’ back. Who wanted to see this Spider-Man without his gal Friday, his guy in the chair, his Gwen?

In Spider-Man: No Way Home this moment (originally from the comics) was alluded to in a trailer, when MJ (Zendaya) is shown falling through the air, terrified and grasping for rescue. We see Tom-Spidey’s fingers just miss her! Then, he’s smashed by a baddie, and it’s up to Andrew-Spidey to save her. He dives after her, and when he lands her softly and safely on the ground, it’s a dizzying relief. His eyes wet, he asks, “Are you okay?” And MJ (emotionally intelligent Gen Zer that she is) responds sincerely, “Are you okay?” As a close-up rests on Andrew-Spidey’s face, the flush of relief and joy suggests he might actually be okay now. No longer will he be haunted by the ghosts of his past.

Speaking of, Andrew Garfield runs away with this movie. The MCU Spidey-squad is great. Trilogy director Jon Watts’ shrewdly cast an ensemble that crackles with charm, can land a joke, and can delve into pathos when the moment demands. Dafoe and Molina are an outrageous delight as deeply theatrical villains, and it’s nice to see Maguire back, especially as he’s been away from the big screen for so long. But that Andrew Garfield. He is clearly electrified by being back in that Spider-Man suit.

Garfield has long talked about how it was a dream role and what bliss it was to work with his (then) real-life girlfriend, Emma Stone. Their excitement over each other made their characters come alive, even when the Amazing Spider-Man movies got heavy-handed with intrigue and underwhelming character threads. Garfield seems truly elated to be given a second chance to leap back into action, and that reads in Andrew-Spidey. He was a great Peter Parker, sparkling with snarky wit and a scrawny-guy hotness that was very of the time. But he’s only gotten better with age. 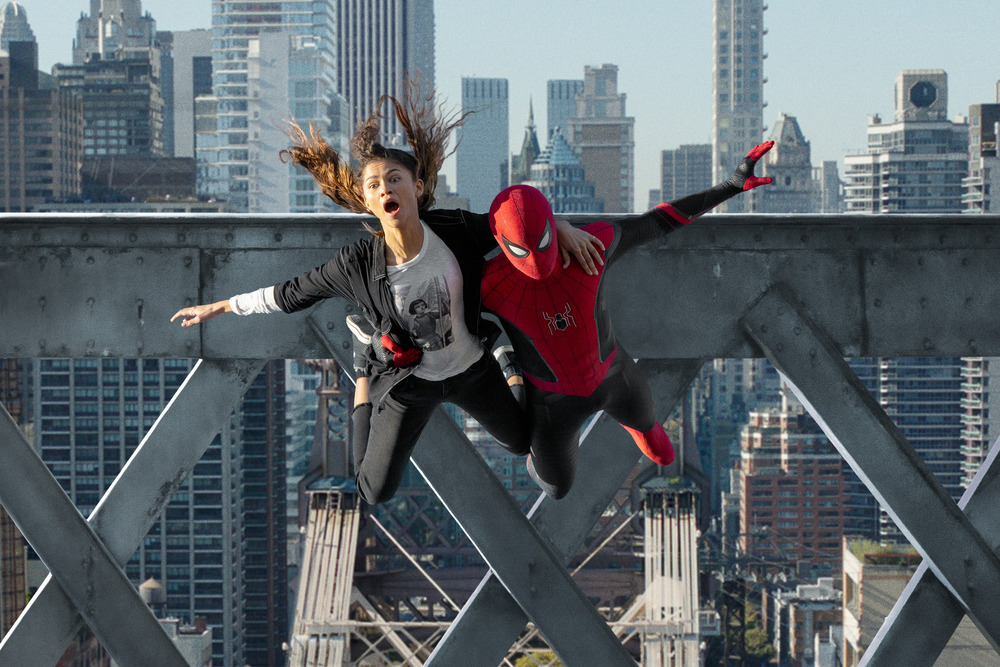 When Tom-Peter wails that the others don’t understand how he feels at the loss of May, at how someone he loved so intensely is dead because of him, the cut leaps to Garfield’s face. Rather than flashbacks to the previous movies, Spider-Man: No Way Home director Jon Watts trusted his cast to carry the emotional context in moments big and small. And here, one look from Garfield, one achingly remorseful look, and we could practically hear Gwen’s spine crack all over again. In the Science Bros scenes that follow, Andrew-Spidey suggests he’s lived a relatively solitary life after Gwen’s death, likely fearful to get too close to someone and thereby endanger them. But in this quest to save the souls of their fiendish foes, he finds a family, learns to forgive himself, and seems poised to re-enter his universe with the open heart to love again.

This leads us back to Tom-Spidey.

After all he’s seen and heard about the lives he could have lived and almost did, Peter agrees to a spell that will make everyone forget him. The resolution of No Way Home shows him getting a puny apartment and unpacking a GED book. Clearly, he’s done at Midtown High. With a hopeful smile, Peter re-enters the donut shop where MJ works to rebuild his relationship with her and Ned. But then he sees that band-aid over her eyebrow. That damn band-aid serves as a gentle reminder of how she nearly died. How he nearly failed to save her. Maybe Tom-Spidey is thinking of Andrew-Spidey and his “MJ” when he decides to walk away. Even if he’s not, he’s walking in his predecessor’s footsteps: a Spider-Man without a team, chasing an uncertain future. But at least he’s carrying more love than loss.

How to Watch: Spider-Man is available to rent or buy on Apple TV.

How to Watch: Spider-Man 2 is available to rent or buy on Apple TV.

How to Watch: Spider-Man 3 is available to rent or buy on Apple TV.

How to Watch: The Amazing Spider-Man is available to rent or buy on Apple TV.

How to Watch: The Amazing Spider-Man 2 is available to rent or buy on Apple TV.

Spider-Man: No Way Home is in theaters.