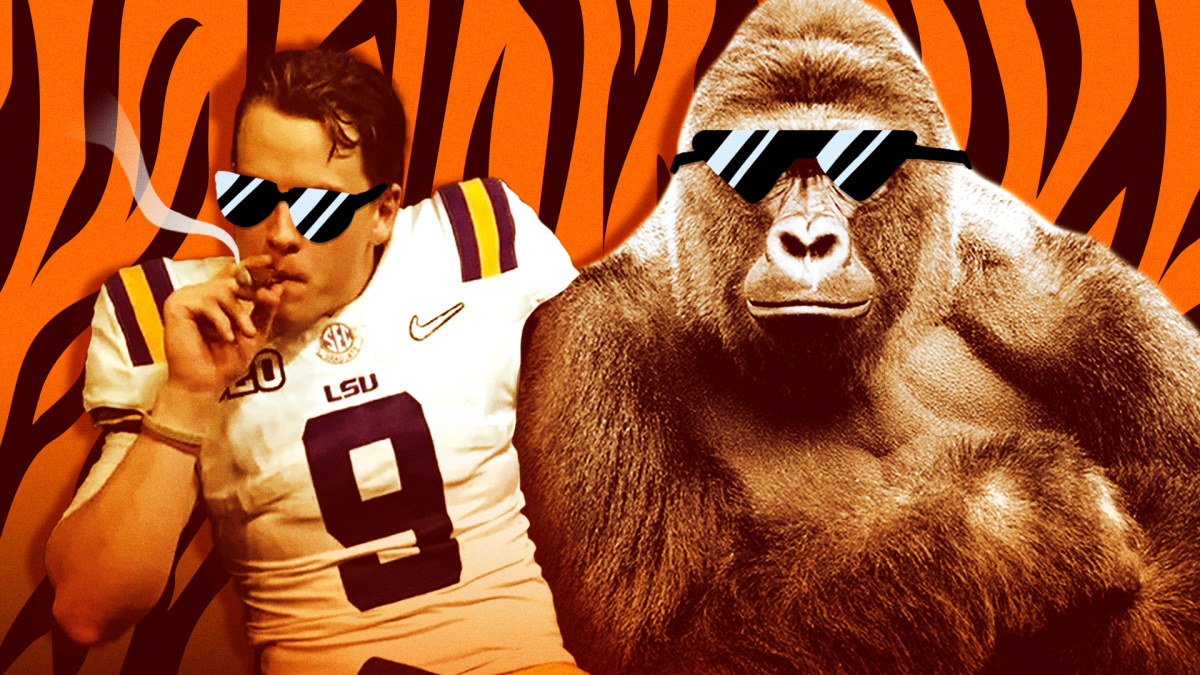 On Sunday, Feb. 13, hundreds of millions of people will look at their TVs during Super Bowl LVI and learn something shocking: The Cincinnati Bengals are really cool.

Heck, you might not have even realized the Bengals exist and there’s a good reason for that. This season marks the first time they’ve won a playoff game in 31 years. Sure, their uniforms are totally sick with tiger-striped helmets in lieu of a team logo, but they rarely make waves nationally because even good Bengals teams usually end their seasons in heartbreak. Nobody expects greatness from them, which is a reputation they’ve more than earned.

The 2021 Bengals team doesn’t care at all about that bad reputation because they’re young —the average age on the roster is 25.6 years old, making the Bengals the 10th youngest in the league. Plus, they’re overflowing with confidence and comedic value. This is the most Gen Z Super Bowl team of all time, with multiple players, like Joe Burrow and Evan McPherson, who happily embrace being walking memes. Most importantly, they might have the most collective BDE of any NFL team I’ve ever seen.

Even if you don’t care about football and you just watch the Super Bowl for the commercials, I promise you’ll benefit greatly from learning about the Bengals. This year’s big game is more than just a halftime show and some glossy ads; it’s a showcase for some of the coolest, funniest guys making plays on the field in years.

It all begins with Burrow

Given what I’ve told you about the Bengals’ lack of success in the last three decades, you might be wondering: “How the hell did the Bengals get here?”

From both a football and attitude standpoint, it all starts with Joe Burrow, a cigar-smoking legend with a great Twitter account.

Burrow, the 25-year-old quarterback for the Bengals, is a testament to the power of both perseverance and simply being ridiculously cool. He flew under the radar for most of his college career before exploding for literally the greatest statistical season ever in 2019. Then the Bengals drafted him (the worst team in the NFL always gets the first choice), and two years later they’re now a win away from ultimate glory.

But enough about that. Let’s talk about Joe Burrow’s tweets.

Anyone who falls within a few years of that blurry line between Gen Z and millennial will see a little bit of themselves in his old tweets. The guy has a lot of thoughts about TV shows like Friends and The Fresh Prince of Bel-Air, among others.

The fun doesn’t stop there. Here’s Burrow engaging in the quintessential Gen Z activity of criticizing capitalism as it regards to amateur athletes:

Burrow even has perennial Nintendo fave “#smashbros” in his Twitter bio, and a cursory search of his tweet history confirms that he is, indeed, a big Super Smash Bros. guy. In fact, a 2019 profile in the Baltimore Sun revealed that he’s apparently good enough at the video game that his friends have banned him from playing with them. Been there!

The next and final Burrow tweet I’ll show you requires a bit of context.

People go way overboard in analyzing college quarterbacks before they jump to the NFL to the point of actually measuring the sizes of their hands and pretending like that has any bearing on how much success they’ll have in the pros. Burrow, who was just weeks removed from winning a championship in college, got disappointing results in the hand measurement department and threw up an “undersized” middle finger at his critics in response, joking that he’d retire due to his “tiny hands”:

Keep in mind that he tweeted that during the post-college season / pre-NFL draft period when prospects are so heavily scrutinized that any little slip-up can cost them millions of dollars. Burrow simply didn’t care.

Joe Burrow is, in the parlance of our times, “that dude.” He’s an incredible football player with potentially 10 to 15 years of excellence in front of him, sure, but that’s only half of his appeal. In a sport where quarterbacks have historically been conditioned to be as robotic and uninteresting as possible (see: Brady, Tom), Burrow has so far never been anything other than his authentic self. One of the best things about the younger generation right now is how many of them share that attitude. They don’t need to be respectable in the eyes of Gen X, Boomers, and beyond as long as they back up their words with greatness.

But enough about Burrow. An NFL team has 53 dudes on it, so let’s talk about some of the other 52 instead of giving all the credit to the captain.

But it doesn’t end with him

Another Bengals player to know about for a reason entirely unrelated to football is Sam Hubbard.

Don’t get me wrong — he’s a good player who’s been key to the Bengals’ success this year on defense, but that’s not why we’re here. No, we’re here because Sam Hubbard did the most 26-year-old-who-lives-in-Cincinnati thing possible and dedicated this Super Bowl to…Harambe.

I want to make something extremely clear: I personally find Harambe jokes to be among the most stale forms of comedy imaginable. A gorilla dying in a zoo six years ago is ancient history by internet standards, and one could argue it was never really funny in the first place. But I’m not going to tell that to a six-foot-five, 265-pound dude whose job is to hit people for a living.

I’m not an idiot.

Bengals defensive back Eli Apple, however, is not afraid to share controversial takes that might greatly anger entire cities’ worth of people.

Apple came into the NFL with high expectations in 2016, but bounced around between three different teams as something of a disappointment before finding his way to Cincy this year. Whether or not he’s been good for the Bengals is irrelevant because he’s in the Super Bowl and his former teammates are not.

One of those former teams is the New Orleans Saints. Apple recently made the highly questionable (but so audacious that I have to respect it) decision to criticize not only Saints fans on Twitter, but the food of New Orleans. You know, maybe the most famous and widely beloved thing about that city.

Making fun of New Orleans cuisine is tantamount to making fun of people for… needing to breathe air and drink water. But Eli Apple doesn’t care. The world needs people like him — not because he’s right, but because it’s really funny.

There are so many more Bengals players I could cover, but I’d like to shine a spotlight on kicker Evan McPherson who is, perhaps, the most “Gen Z Bengal” of them all.

Teammates call him “Money Mac” and “the king of chicken fingers,” per this ESPN profile. He’s reportedly promised to do the popular “Griddy” touchdown celebration dance that’s recently taken the NFL by storm, if the Bengals win Super Bowl LVI.

My man plays an inglorious position where simple competence is never appreciated. We love kickers when they nail the big ones and then run them out of town when they don’t. McPherson, at age 22, just made game-winning kicks in two straight games to get the Bengals to the Super Bowl.

McPherson carries himself like a guy who thinks he’s the best player on his team. Considering he’s been literally flawless (he hasn’t missed a kick) this postseason, and he called his shot before making a 52-yard game winner in the playoffs, who am I to say he’s wrong?

This is what football is really all about

If I haven’t made it clear enough that I love this Bengals team, let me add one more spicy ingredient to the stew.

I am a diehard Kansas City Chiefs fan. In the AFC Championship Game (a.k.a. the one you gotta win to make it to the Super Bowl), the Chiefs gave up a 21-3 lead to the Bengals and lost. I was despondent…for about 45 minutes. Then I remembered this Bengals team is rad and I’d happily root for them, even after breaking my heart like that.

If you’ve ever met a sports fan, you know how hard it is to make us respect our destroyers. The Bengals did it to me effortlessly.

Do the Bengals stand a chance in hell of beating a Rams team that’s generally more talented across the board? I don’t know and I don’t really care. You shouldn’t either. The scores, the stats, and the trophies are all just constructs to give fascinating, super-talented people like Burrow and McPherson an excuse to show us who they are.

Football should be funny and weird. I can’t think of many teams that exemplify that standard quite like the 2021 Cincinnati Bengals. Burrow himself is in on the joke. After punching a ticket to the Super Bowl, he showed up to his postgame interview in a black turtleneck with a diamond chain, which prompted a reporter to ask if the ice was real. His reply?

“I make too much money to have fake [diamonds].”