That dry and scratchy throat could be related to the air you’re breathing in all day and night. Adding an air purifier to your most inhabited spaces can help reduce some of the dust, mold, bacteria, odors, dander, and other airborne contaminants you regularly inhale. And this sleek PURO²XYGEN P500 one happens to be on sale for $55 off as of Feb. 5.

The PURO²XYGEN P500 Air Purifier works to identify and target dust, dander, hair, volatile organic compounds, and even bacteria. It utilizes a HEPA filtration system that captures particles as small as 0.3 microns in size and has an efficiency rating of 99.97 percent. Through six different stages, this purifier captures the toxic air, absorbs it, and then sanitizes it before recycling it back into your home for you to breathe in.

This machine also breaks down everyday pollutants like fumes and gas from your stove, car pollution that leaks in through your windows, and pet dander. With the cold catalyst filtration system, the PURO²XYGEN P500 decomposes multiple harmful gases caused by everyday actions. It even has a negative ion generator, which helps clean some of the pollen, dust, mold spores, and other allergens from the air around you.

See it in action:

Since it’s only 20 inches tall, just under 13 inches wide, and less than seven inches thick, it won’t take up a huge chunk of your floor space, either. It slides behind couches, side tables, and more with ease. 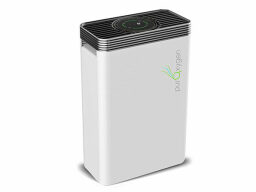