UPDATE: Feb. 2, 2022, 10:30 a.m. EST Pokémon Legends: Arceus is still $5 off on Amazon as of Feb. 2 (down to $54.99 from $59.99). It doesn’t come with the preorder exclusive Garchomp Kimono skin anymore, but anyone who purchases a copy before Monday, May 9 can unlock two bonus in-game cosmetics directly through the game’s Mystery Gifts feature after about two hours of gameplay.

The reviews are trickling in for Pokémon Legends: Arceus, Game Freak’s upcoming action RPG for the Nintendo Switch — and from the sound of things, it’s one of the finest Pokémon games we’ve gotten in years (albeit a little “messy” at times):

If that’s enough to sell you on Arceus, you still have time to pre-order a copy on Amazon ahead of its release this Friday, Jan. 28. Doing so will save you $5 and nab you an exclusive in-game Garchomp Kimono outfit inspired by the powerful, pseudo-legendary Generation IV Pokémon.

Part of what makes Arceus so compelling is that it’s set long before other modern Pokémon games like Brilliant Diamond and Shining Pearl, which saw people and pocket monsters living side by side. Players will actually be tasked with compiling the ancient Hisui region’s first-ever Pokédex to better understand the mysterious wild creatures that roam its lands, from brand new beasts like the Wyrdeer to regional variants of classic Pokémon. (PSA: Hisuian Growlithe are simply adorable.) If you’re lucky, you’ll even catch a glimpse of the mythical Arceus.

Note that Walmart has the game on sale for the slightly better preorder price of $54.88, but Amazon is the only place where you’ll get both a skin and a discount for reserving a copy — grab one ASAP, as its offer expires today (Jan. 27). 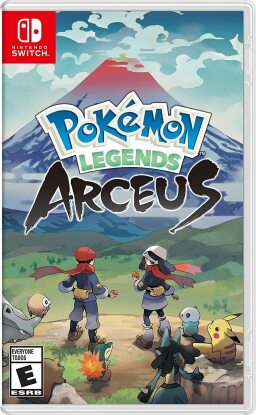