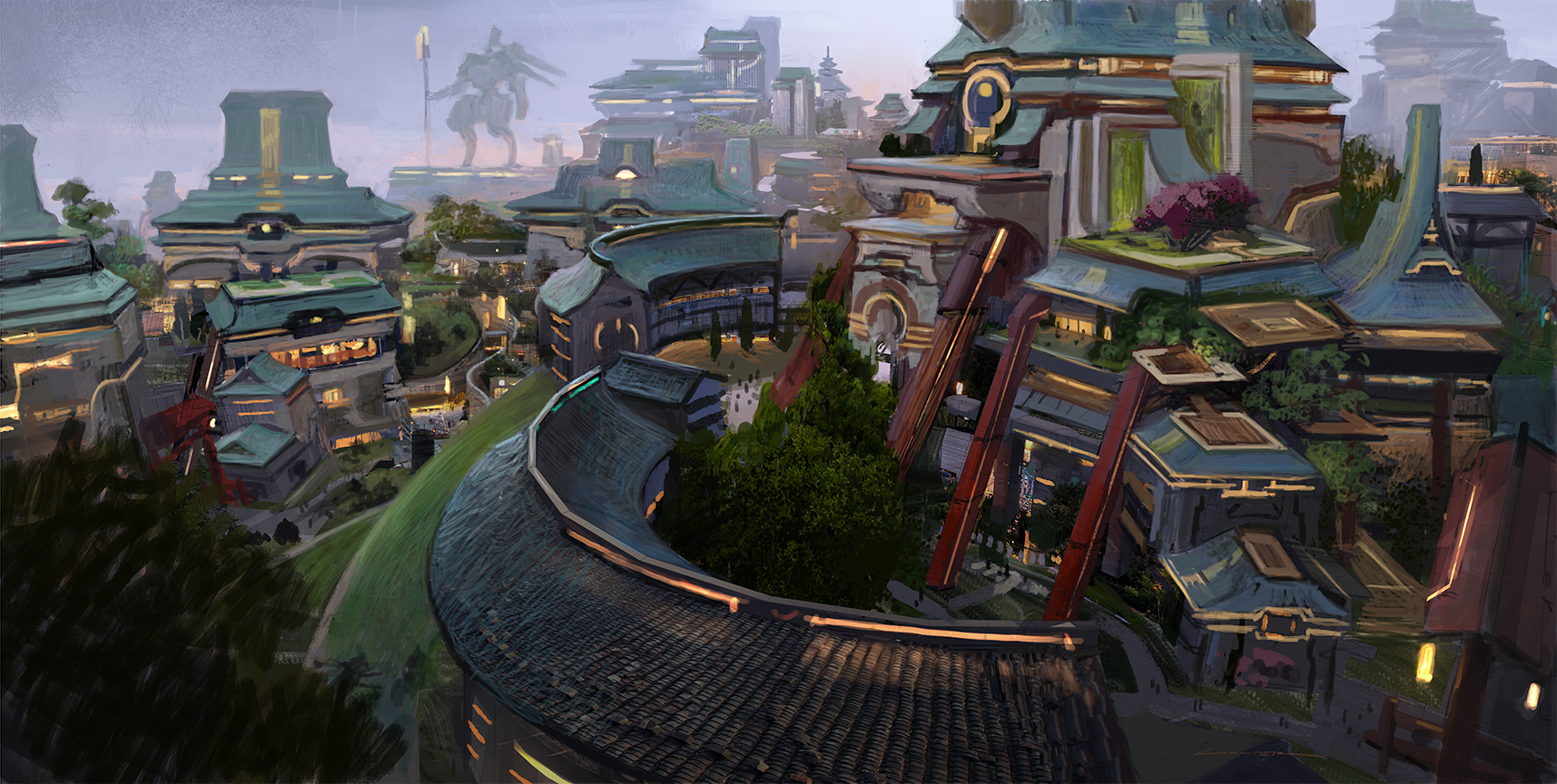 Throughout its almost 30-year history, Magic: The Gathering has focused primarily on fantasy elements and tropes. Now the trading card game is exploring something a bit more high tech, blending traditional and sci-fi elements in the upcoming set, Kamigawa: Neon Dynasty.

Due for release later in February, the 302-card expansion returns to Magic‘s Japanese-inspired Kamigawa plane, which was last seen almost two decades ago. But while 2005’s Saviors of Kamigawa expansion was inspired by Japanese mythology and took place in the past, Kamigawa: Neon Dynasty leaps 1,200 years into the plane’s cyberpunk future, revealing how it has evolved in the centuries since. 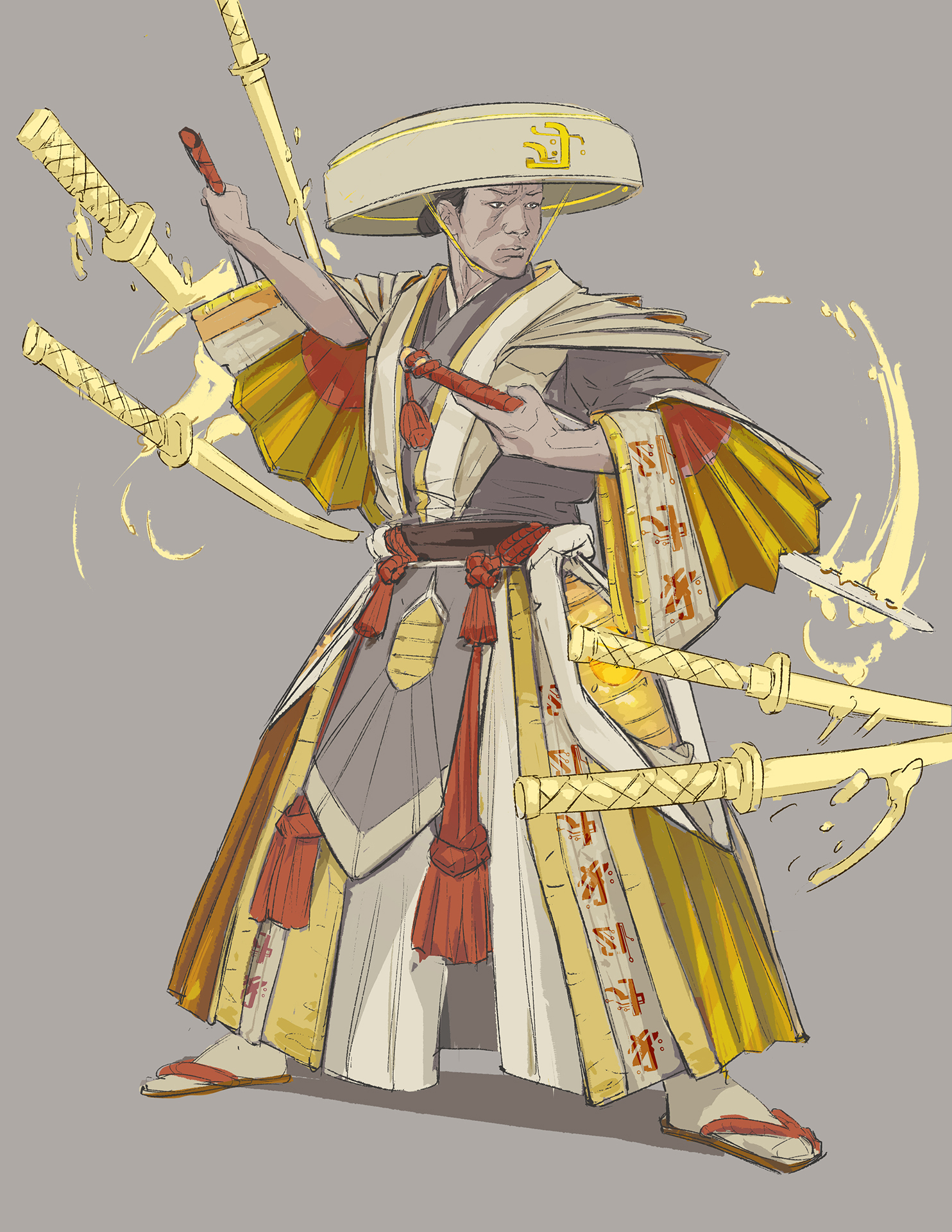 This exclusive concept art depicts a samurai Spirit Fighter who works in Eiganjo Castle for the Imperials. Credit: Jehan Choo / Magic: The Gathering

In the original Kamigawa block, Eiganjo Castle was the home of Lord Konda, whose actions sparked the war which ultimately destroyed it.

“Some of the new cards talk about the rebuilding of Eiganjo,” Daniel Holt, senior user experience designer at Wizards of the Coast, told Mashable. “Now we see it today: it has been restored to the imperial city that it once was, but a little better now [that] they have better leadership in charge, and all of Kamigawa is thriving with technology and tradition.”

Spirit Fighters are part of that dichotomy. The floating objects surrounding these characters indicate they are bonded with a kami, or spirit, which in Magic: The Gathering means they’re an Enchantment Creature.

“Kamigawa: Neon Dynasty really plays up technology or modernity versus tradition, or technology versus the past,” said Holt. “This person with the spirits [and lanterns in the concept art] leans way more on the traditional side. They think that ultimate power should be drawn from the spirits by forming a bond with the kami and living in harmony with the spirits. Whereas the other side, technology, they think it’s a little easier than managing a relationship. You can just have access to power because of technology.” 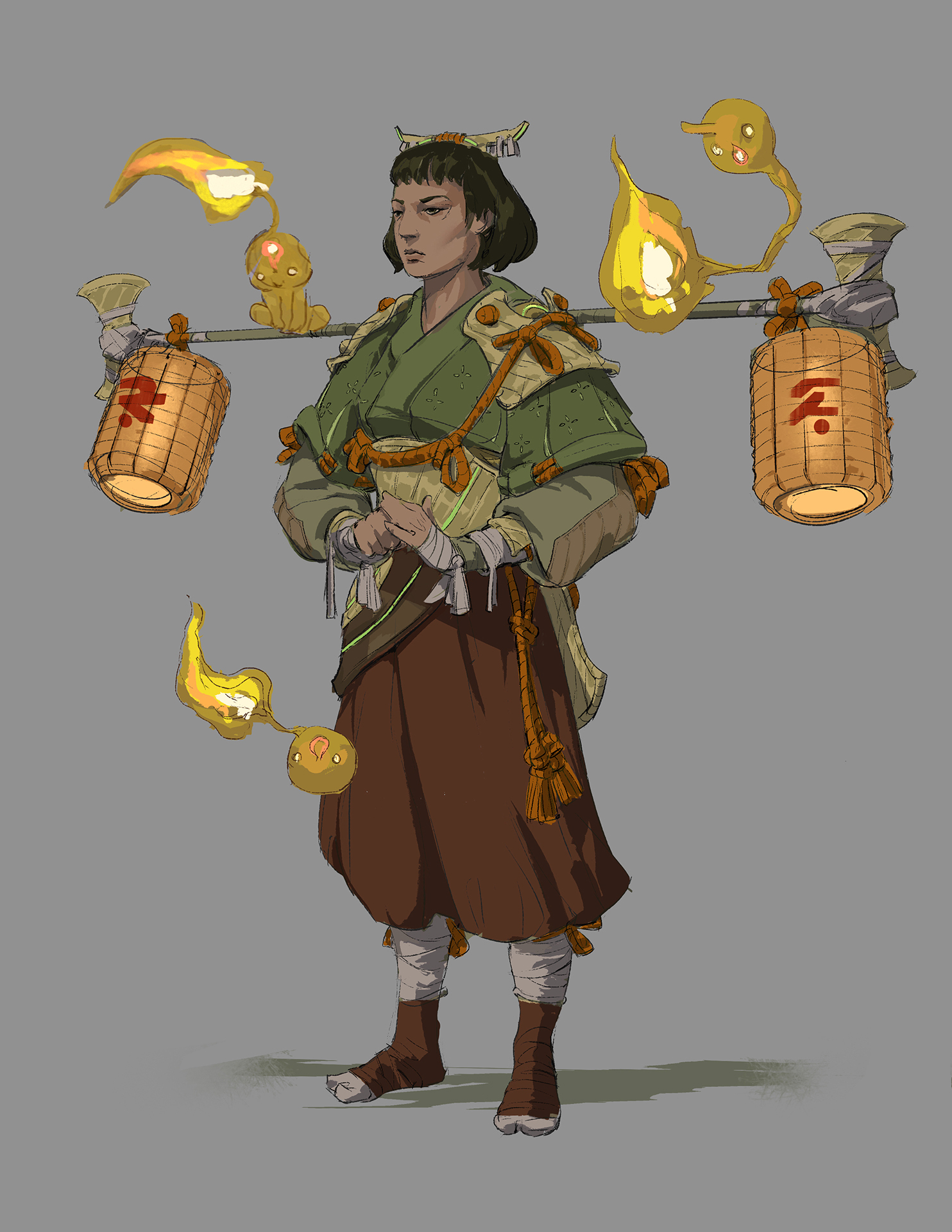 From sorcery to sci-fi

Machines and gadgetry aren’t completely new to Magic: The Gathering, with the previous Kaladesh and Mirrodin sets also exploring these themes. Even so, sharp, neon-lit sci-fi is a decidedly new direction for the game, whose automatons have historically stayed closer to the realm of magical fantasy.

“We already did Kaladesh which was a more futuristic vibe, but that was a completely different feel to it than what we’re doing here,” said Holt. “I think we just want to hit that very neon, colourful trope.”

Kamigawa: Neon Dynasty won’t be the last Magic fans see of harder sci-fi, either. Future expansions will also dabble in the area, starting with the upcoming humorous set Unfinity.

“I think [Kamigawa: Neon Dynasty is] opening the doors [to more sci-fi in Magic] and it’s starting in a way that feels a little more natural, you know?” said Holt. “Sure we have the higher technology than you find in other worlds in Magic, but it’s all characters and places you kind of know, especially if you know the original Kamigawa. Sure there’s an electronic sword here, but it’s being held by a kitsune fox warrior, like it’s all familiar at least… It’s not 100% technology, it’s a mix.”

This doesn’t mean a more straight sci-fi set is entirely off the cards though.

“I think a future set if we built it from the ground up could be really anything we want,” said Holt.

The official decision to set Magic‘s new expansion in Kamigawa was made relatively late in the development process. Even so, the initial choice to approach the futuristic set through a Japanese lens was driven by an unofficial desire to see Kamigawa return.

“I think some of us secretly wanted it to be Kamigawa, I don’t think it was just me after I pitched the idea,” said Holt. “So I think we just kind of pushed it in there. You know, ‘Hey, let’s just test the waters. We don’t have to say it’s Kamigawa.'”

This tentative approach to the plane wasn’t unjustified. While Holt loved the original Kamigawa block 18 years ago, he acknowledged that others’ memories of the expansion weren’t so fond.

“Stakeholders didn’t want to hear the sound of Kamigawa — that’s a long time ago. A lot of new people don’t even know the set,” said Holt. “But internally, yes, we wanted some Kamigawa. If not Kamigawa we could at least push this cool Japanese-inspired futuristic set.” Eiganjo isn’t the only Kamigawa location that got a sci-fi makeover. Credit: Wizards of the Coast

Of course, the set’s distinct Japanese setting raises reasonable questions about cultural sensitivity. Kamigawa: Neon Dynasty‘s development was primarily overseen by cultural consultant James Mendez Hodes, who holds a master’s degree in Eastern classics but is not Japanese himself.

“A lot of Mendez’s talks were later on,” said Holt. “He would see more final stuff and then would funnel back to [lead art director] Zach [Stella].”

Others contributed as well. While Kamigawa: Neon Dynasty was developed by Wizards of the Coast’s U.S. office, its concepts, world building, and art were all designed in consultation with their regional Japanese team, which is primarily involved with marketing. For example, Koichiro Maki from Wizard of the Coast’s Tokyo office offered ideas such as the Toad Rider, though he was not hired as a designer on this set and simultaneously continued to perform his other responsibilities.

However, no Japanese consultants or employees were involved in the development of individual cards or mechanics. Further, no Japanese designers or developers were hired to work on Kamigawa: Neon Dynasty or were involved in the set’s creation. This inescapable outsider’s lens feels particularly dissonant considering Mendez stated in a video recorded last December that they “wanted to focus on not the Western gaze attitude, not the lies that are told by outsiders, but the lies that a culture tells about itself.”

Holt did note that, while Kamigawa: Neon Dynasty‘s lore and mechanics were primarily produced by non-Japanese developers, Wizards of the Coast partnered with Japanese video game developer Kogado Studios to create the set’s alternate art. New Magic: The Gathering sets typically include alternate art and frames for some cards in booster packs — a project referred to as Booster Fun.

“With the frames, specifically, you know we have the ninja, the samurai, the glowing neon, we have a few different frames,” said Holt. “We had a really cool opportunity with the art to partner with Kogado Studios in Japan, where our art director Tom Jenkot worked with them and their studio… All of the Booster Fun for the most part is by them, and the samurai frames [and] ninja frames have Japanese artists working on them.” 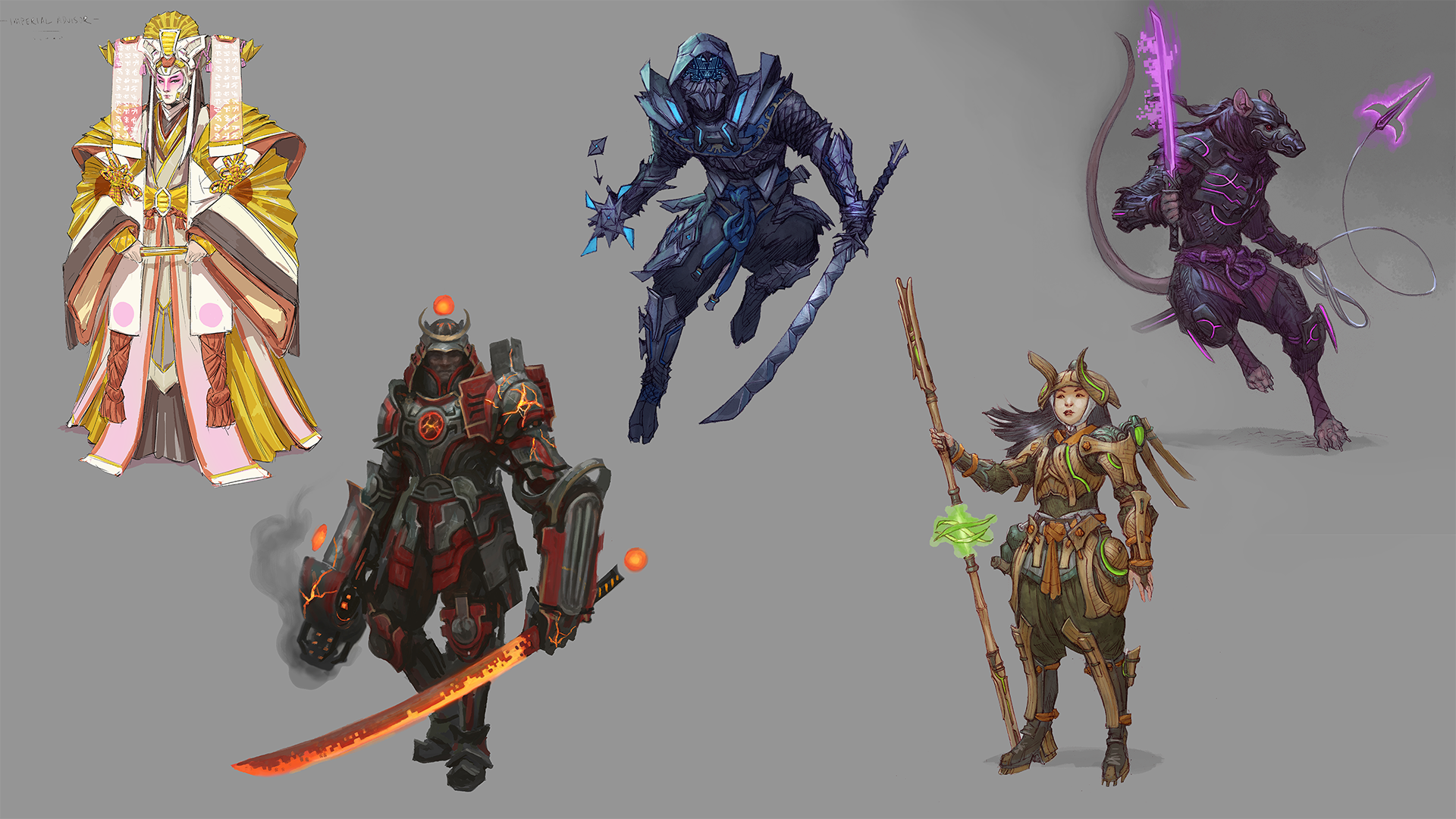 Most of Kamigawa: Neon Dynasty’s art was created by non-Japanese developers working with cultural consultants. Credit: Wizards of the Coast

A link to the past

The decision to bring back Kamigawa wasn’t inspired by a connection to or love for Japan itself. Rather, it was driven by nostalgia for the original Kamigawa block, with Holt reviewing Kamigama: Neon Dynasty to ensure it remained canonically consistent with the 18-year-old expansions.

“I started Magic when I was 14 playing Kamigawa,” said Holt, fondly recalling his first forays into the game. “When you’re a 14-year-old you can’t afford new cards all the time, so you just have what you have and you and your friends just keep building decks with your collections and playing.”

As a big Kamigawa nerd, Holt’s favourite aspect of Kamigawa: Neon Dynasty is its use of Sagas. Introduced in 2018’s Dominaria expansion, Sagas are a type of Enchantment that activates different abilities on each turn. They are also intended to recount past events, allowing Holt to more obviously refer back to Kamigawa’s history.

“Sagas always tell stories, and because this is set 1,200 years later all the mortal characters are deceased now… Toshiro Umezawa [is] dead now in new Kamigawa, but we got to make a Saga that told his story and then became this creature on the back [of the card],” said Holt. “We’ve never had a Saga that turns into a creature, so that was really cool.”

Holt noted that there are many callbacks to familiar elements from the previous Kamigawa set, including other characters such as the Brothers Yamazaki. While the identical twins have since died, two cousins who are descendants of the siblings now appear in Kamigawa: Neon Dynasty. Further, not all creatures who appeared in the 2005 expansion have passed on.

“Some of the spirits — because spirits aren’t mortal, they can live as long as they need to — they’re still around,” said Holt.

Kamigawa: Neon Dynasty is an interesting new step for Magic: The Gathering, and serves as an exciting gateway to harder sci-fi settings.

“There was a lot of hesitation, you know, the original Kamigawa is known for not doing so well,” Holt told Mashable. “A lot of fans today don’t know it or they don’t fondly remember it, and so I was a little worried, [thinking] did we make the right choice here? But it’s just gotten such a warm reception on social media and everybody’s loving the preview season we’re in right now, and it warms my heart to see it.”

It’s also good that Wizards of the Coast at least conferred with cultural consultants. Still, there remains room for the company to keep growing in how it draws from existing cultures.

“[W]e’re going to make mistakes,” said Mendez. “And that can be okay, as long as we own up to them and then we move forward across them in the future, [and] we do better in the future.”

Hopefully this will soon include redefining “we.”