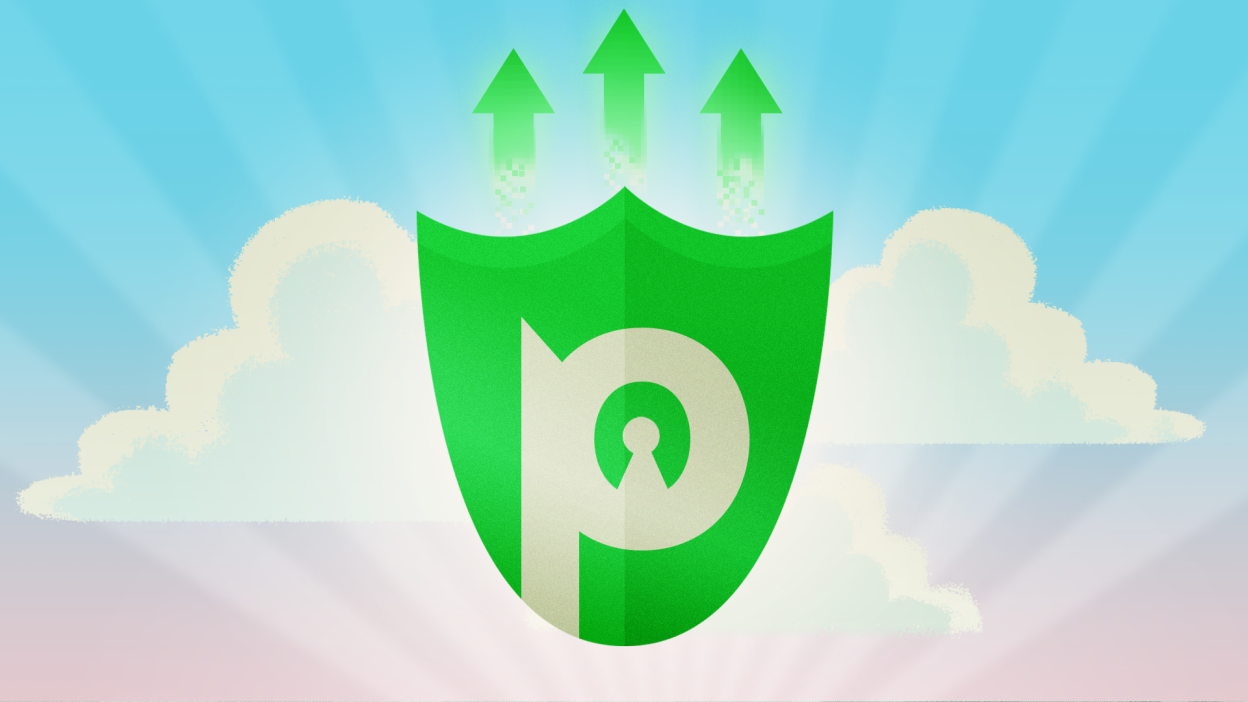 A virtual private network, or VPN, usually has a lot on its plate. A VPN needs to be accessible for a relatively large audience with a service that actually works. If a VPN does not deliver privacy or security, it fails. For some users, that failure can lead to some real-world consequences.

PureVPN delivers a smartly designed package that mostly succeeds in delivering security and privacy. Some features worked while others didn’t and you’re left with a good, not great, service that leaves you wanting more than a nice design.

PureVPN fails to stand out from the crowded field of quality VPNs. There are just too many good services out there. Too inconsistent and too buggy remain the top complaints about this VPN. PureVPN does have some great pros — including passing a no-logging audit, lots of features, better access to geo-locked content, and split-tunneling to choose which services run through the VPN — that make it appealing, but there are a few drawbacks that prevent it from being among the best. All plans include a 31-day money-back guarantee.

Why should you consider using a VPN?

There’s a renewed interest in VPN services following a seemingly endless news cycle of new privacy concerns. Sure there are the high-profile ones, like everything that’s been going on at Facebook, but your security concerns start as soon as you decide to use the internet.

In order to access the web, you need an IP address. Your IP address is assigned to your computer by your Internet Service Provider (ISP). That means your ISP knows your address, personal information, and internet activity. You can see why that’s not a great situation to be in. ISPs may not be actively monitoring your activity and your data may not be readily accessible, but it’s out there. Regulatory rollbacks in the last year make it legal for ISPs to sell your data. These companies say they would never do that — have you ever known a company to lie?

If, for some odd reason, you don’t believe your ISP or want to ensure that you have some level of control, there are a few options. One of the most popular and direct solutions is to use a VPN service like PureVPN, which connects you to the internet through its servers and not your ISP’s.

PureVPN makes a good first impression. You’re greeted with a series of tiles based on different activities. There’s one for Stream, another for Internet Freedom, a third for Security/Privacy, and a fourth tile for File Sharing. 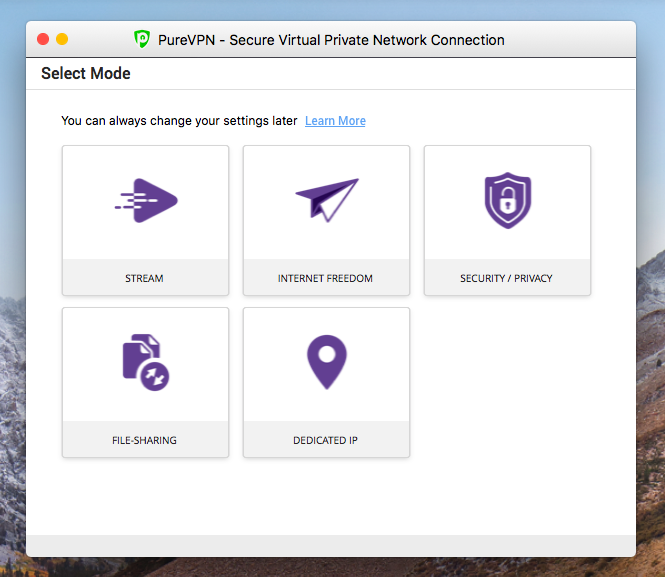 Selecting your purpose changes the options found in the third column of PureVPN’s home screen. By choosing Stream, I have a Channels section, whereas Internet Freedom lets me choose different Purposes.

PureVPN also suggests servers to use based on social-media usage, streaming preference, and VoIP usage. It’s all pretty handy and an intuitive approach to tailoring your VPN experience. Instead of configuring individual security features, you can choose the right activity for you.

Of course, you can further optimise your experience with additional security. You can select your encryption protocol, whether it’s the default UDP or the slower, but more secure TCP, or Split Tunneling if you want to select which apps will use PureVPN.

How easy is it to connect to PureVPN?

The Android app itself mostly performed well. We did experience connectivity issues from the default server on multiple occasions. Restarting the app didn’t help, and it took several tries before we were able to connect to the VPN. It was frustrating way to start, and there were no error messages before we were greeted with another green button imploring me to Connect. 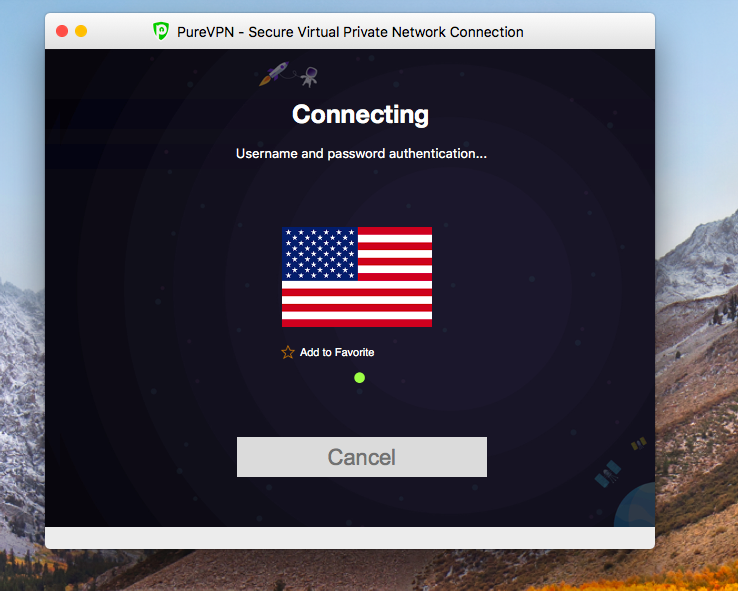 We restarted the app and tried again. Instead of choosing a U.S. server, we successfully connected to a server in the UK. That led to poor download speeds, which was pretty disappointing. We ran a speed test multiple times hoping to get download speeds above 10Mbps, but that never happened. Upload speeds fared better, around 20Mbps, but still disappointing.

Unsatisfied with the U.K., we tried switching back to a U.S. server without any luck. I decided to chat with technical support. We explained the issue, and were told to try switching from UDP to TCP. It worked. The tradeoff was a near-40Mbps drop in download speed, while upload speeds were down a negligible amount in one test and down around 17 Mbps in another test.

We explained that’s the reason why we didn’t want to use TCP and were noticing these slower speeds. We received a detailed answer regarding the different factors that affect speed. It’s informative but doesn’t help explain why we had no other options but to select the TCP protocol. Maybe chalk it up to a random bad day, but it was still a frustrating experience. The Android app is still prone to crashing, according to VPN Service. The app did receive an update and a redesign but still remains underpowered compared to its competitors, per TechRadar. 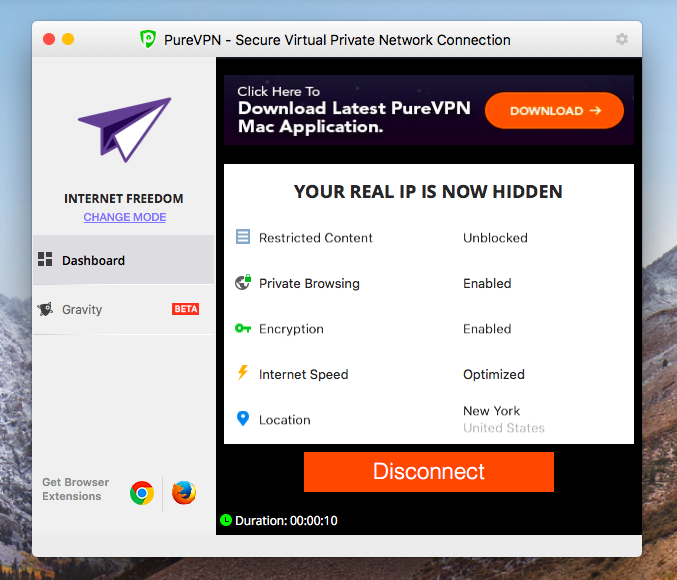 We decided to use the Stream option to do a global channel surf to forget about the connectivity woes. We selected FranceTV to start, even though we wouldn’t understand what was going on. It worked fine. Switching over to the BBC, we were met with an error message. Even though my IP address was in Manchester, BBC detected we were using a VPN and blocked access. We got an error for Sony LIV, but we were able to connect to MatchTV, albeit with relatively long load times.

PureVPN performed better on a Mac and as a Chrome extension. There are still tradeoffs, including inconsistent speeds, that hinder PureVPN’s performance.

After downloading PureVPN for a MacBook Air, we quickly connected to a server. However, speeds started to suffer once we travelled outside the default server. Leaving New York, we headed first to Atlanta. Upload speeds were down by 3Mbps, but download speeds were down over 30Mbps. We really started to notice slower speeds as we travelled further west to San Francisco.

Speeds varied dramatically during the speed test. Sometimes the results would reveal a 15Mbps drop in download speeds while other tests had download speeds that couldn’t crack 10Mbps. Poor speeds plagued my experience in the UK with download speeds below 10Mbps and upload speeds in the teens.

Does PureVPN work with Netflix?

Practically every VPN flaw could be forgiven if Netflix works on the service. The streaming service has ramped up its security protocols and that means most VPNs are shut out from Netflix. If you’re hoping to watch the best that the U.S. offers on Netflix, you may be out of luck depending on what VPN service you use.

Netflix doesn’t work most of the time with PureVPN, but you might have luck with the Chrome extension. Credit: netflix

Netflix was a firm no while using PureVPN for Android. It’s to be expected at this point that the streaming service will block access if it detects VPN or proxy usage. We struck out again on a Mac. However, Netflix did work when you use PureVPN as a Chrome extension. So you should skip the app and go straight to the extension if you want to bypass regional restrictions. Netflix worked in the latest tests for TechRadar, but was more inconsistent with VPN Service.

Doing a quick search of PureVPN prior to this review revealed two initial concerns. While PureVPN states it doesn’t collect logs, that’s not entirely true.

Despite its claims as a “no logs” VPN service, PureVPN does keep connection logs. (Though, PureVPN also claims that it does not keep records of these logs.) Data in these logs include the day you connected to a VPN location and your ISP. PureVPN says it does not collect the specific time you connected to a VPN, your original IP address, or your IP address after connecting to a VPN. PureVPN also collects bandwidth usage data to ensure quality and prevent usage abuse, according to the service.

PureVPN notes that the information it does collect can’t be used to personally identify you or your internet activity. However, there are several VPN services that offer a true “no log” experience and that’s something to consider if you’re choosing between PureVPN and its competitors.

Working in PureVPN’s favour is where the company is headquartered. Some countries have strict internet regulations or a history of data surveillance, which would be a huge concern for any seeking internet privacy. There are also more than a dozen countries, including the U.S., Canada, the UK, Germany, and France, that have intelligence gathering agreements. Initially known as the Five Eyes alliance, the number of member countries has grown to 14.

So you’ll want to carefully consider where a VPN service is headquartered because they could hand over your data if compelled by the local government. PureVPN’s parent company is headquartered in Hong Kong, which has favourable data laws, and isn’t part of the intelligence-gathering alliance.

DNS leaks were another concern. If an online DNS leak test reveals two servers, you’re experiencing a domain name system (DNS) leak. It seems PureVPN has patched up this problem and my tests revealed no leaks.

There are some things that we really like about PureVPN, but there are also some serious drawbacks. Connectivity issues, inconsistent speeds, and a few features that don’t work well are just a few knocks against PureVPN. However, you can bypass Netflix’s security using PureVPN’s Chrome extension. Even with that benefit, there may be too many reasons to skip PureVPN and try a more trusted service.