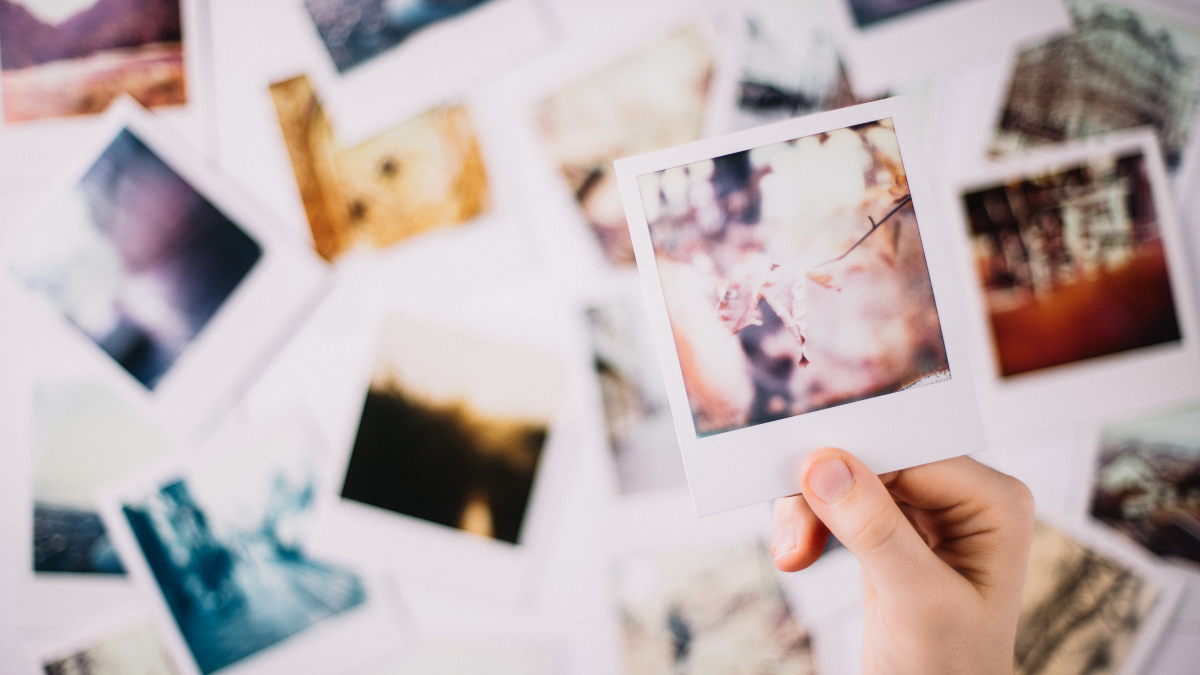 Earlier this year, Kourtney Kardashian shared a photo of her and her fiancé Travis Barker to Instagramthat made their relationship look like a whirlwind of euphoria. Their backs, illuminated by the camera’s flash, are seen facing the lens. They hold hands and gaze up at the “It’s A Small World” ride that towers before them. The building’s many shapes and pinnacles appear fuzzy as they bask in the glow of blue and yellow light. The busy facade infuses the moment with a sense of whimsy, and the purple sky visible in the distance creates a warm backdrop for the evening.

The photo looked like a subpar shot from an early 2000s disposable camera, yet Kardashian chose to share it with her 155 million Instagram followers. It wasn’t the first blurry photo she’s posted, and since then, she’s made similar hazy shots a regular attraction on her feed. She posts blurred views from car windows, blurry shots of her and Travis kissing and laughing, blurry photos of night swims and her kids jumping on the bed, and she’s even Instagrammed a blurry photo of herself from a professional Vogue shoot.

It’s unclear who exactly popularized sharing blurry photos with followers, but in 2021, other celebrities, including Beyoncé, Dua Lipa, Harry Styles, Hilary Duff, Ariana Grande, and Olivia Rodrigo have all followed the trend.

The pandemic is changing the way people use social media, and while Instagram is still a place for occasional glamorous, filtered photos, now more than ever people are finding joy in intentionally posting flawed content. Somewhere in between learning to wash our hands while singing “Happy Birthday” twice and our newfound Omicron anxiety we said, “fuck it,” and decided to collectively embrace chaotic social media posts. In 2021, Instagram users openly find comfort in trauma memes, casually assemble random photo dumps, and teens are even saying to hell with finstas and showing their true selves on main.

Instagram’s latest unconventional trend, posting blurry photos, is further proof that people are abandoning their polished pre-pandemic posting standards to share imperfect content that more accurately reflects reality. Blurry photos were once thought of as worthless mistakes — seen as nothing more than unfocused swirls of color that failed to clearly capture a moment in proper detail — but today they’re considered evidence that wild, carefree fun was had.

Seeing blurry photos on social media is nothing new. Non-tech savvy people who struggle to take good photos have been posting them for years, and they were ubiquitous in the early days of Instagram when phone cameras were far less advanced.

But nowadays, people are purposely posting blurry photos to infuse their personal feeds with a certain essence. Rather than serving “poor quality photo” vibes, intentionally posted blurry photos serve “I’m having too much fun and living life so fast that a camera can’t even capture me” vibes. Blurry photos are aspirational in a sense, and a reminder to let loose in front of the camera sometimes and embrace life’s candid moments. Whether blurry photos are intentional or accidental, the decision to post them on social media has become deliberate, so I’ve started calling them “plurry photos” (planned + blurry) or “plurries” for short.

Intentionally posted blurry photos serve “I’m having too much fun and living life so fast that a camera can’t even capture me” vibes.

So why have blurry photos risen in popularity this year? I suppose part of their appeal aligns with the recent pop punk revival. Angst is in the air, and blurry photos offer Instagram users a way to rebel against immaculate, staged content that so often dominates the platform. Had you told me years ago that a Kardashian would be dating Travis Barker and littering her professionally curated Instagram grid with badass blurry photos I would have needed some real convincing, but in 2021, blurry shots of Kravis on social media aren’t even surprising, they just make sense. Perhaps fellow blurry photo fan Channing Tatum explained their appeal best when captioning his own captivating, mysterious blurry shot in August. He simply wrote, “Life is a blur.” That it is, sir. That it is.

Aside from fitting the pandemic mood, blurry photos have likely become more widespread as a result of the iPhone camera’s Night Mode feature, which was introduced in 2019. All of the blurry photos I accidentally snap (and the majority of blurry photos I see posted online) are taken at night or in a dark setting. Why? The iPhone’s Night Mode, which automatically enables whenever an iPhone 11 camera (or newer device) detects low light, is extremely motion-sensitive. Night Mode is designed to increase exposure time on photos, which helps brighten the final image, but successfully capturing a photo in the dark requires you to keep the iPhone’s camera and subject incredibly still while shooting. If you don’t, motion (which presents itself as blur) is often visible in the resulting photo. While people can tweak the blur on their Portrait Mode photos and more than a few photo editing apps with blur effects are available for download, a lack of camera stabilization in Night Mode is likely behind some of the most organic, accidental blurry photos. (The iPhone can also produce blurry photos if the subject is too close to the camera lens.)

10 of the best instant cameras based on internet reviews

Like many internet trends, the spike in plurry photos may eventually die down, but now that blurry aesthetics are no longer seen as inferior and undistinguished, I imagine they’ll become regular visuals on our timelines.

I, for one, welcome them, because as Marie Kondo would say, I love mess.