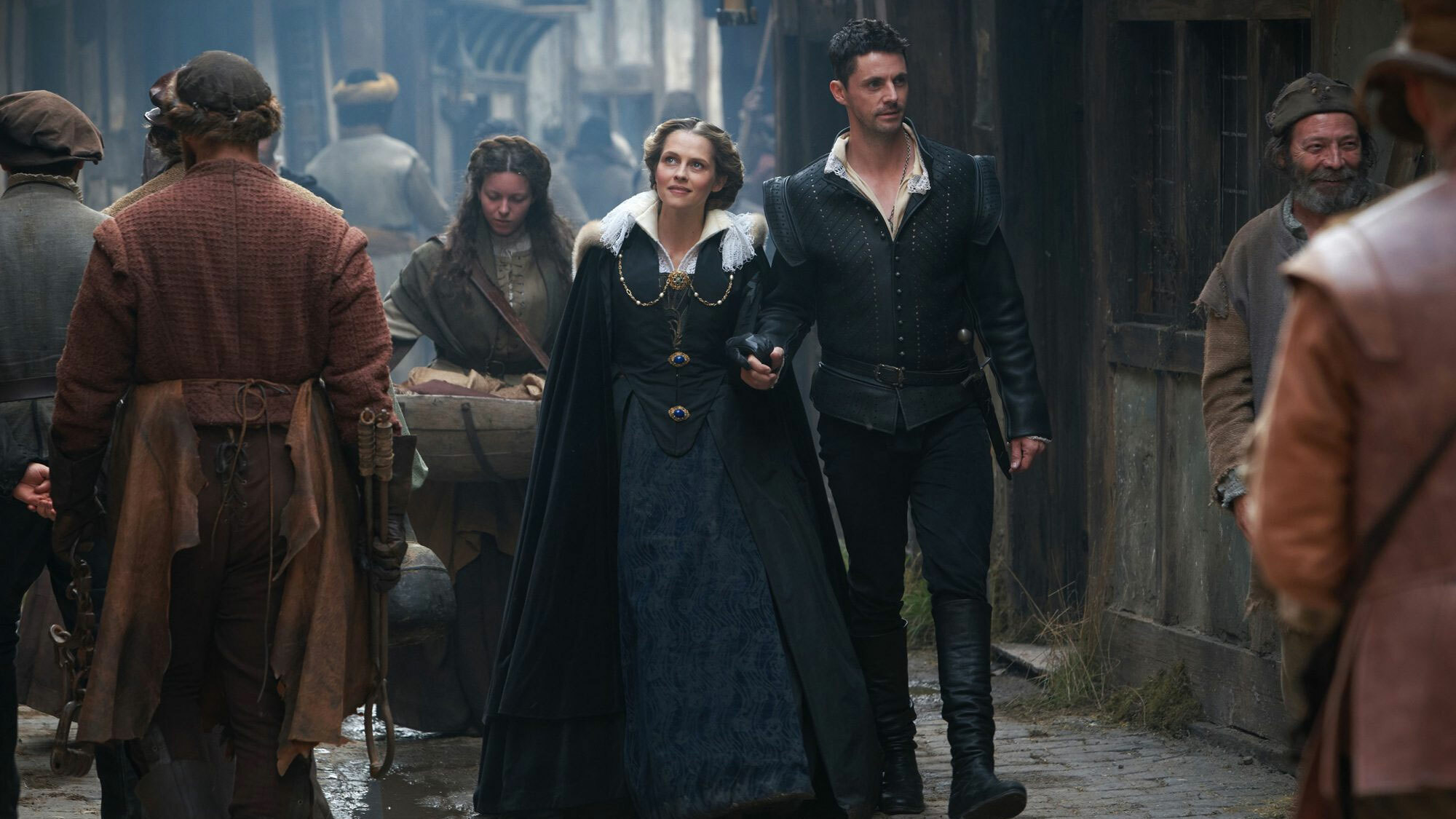 I have so many gripes with the fantasy series A Discovery of Witches and yet the squeal of delight I emitted when I saw that its third season had premiered in January could have shattered glass.

The series is the TV adaptation of the All Souls Trilogy by historian-turned-fantasy-novelist Deborah Harkness. Season 3, which premiered January 8, finds protagonists Diana Bishop (a witch played by Teresa Palmer) and Matthew Clairmont (a vampire played by Matthew Goode) back from ye olden times ready to find and repair a missing manuscript, defeat their bigoted enemies who aren’t down with inter-species love, find a cure for a catastrophic vampire illness, and safeguard the future for their babies.

Thanks to Harkness’ academic pedigree, the books and show adaptation have an incredibly nerdy appeal: The event that starts the supernatural drama is the protagonist checking a book out of the Bodleian library in Oxford. Said protagonist, Diana Bishop, is a historian of science/Witch-in-denial doing a visiting professorship at Oxford. Her forbidden love interest is of course rich and handsome vampire Matthew Clairmont who has most recently been using his eternal life to publish a bunch of scientific papers.

Anybody got a fan handy?!

While the books are no great works of Literature, the trilogy is a page-turner I giddily devoured because being in a world of witches, vampires, demons, and secrets was just plain fun. The mystery and (duh) romance, and the academic setting with many, many references to actual historical figures and events that play into the plot, made the series catnip for bookish millennials like me. In book two, Diana and Matthew travel back in time to Elizabethan London and you can just tell that Harkness is playing out a personal fantasy of being plopped into this time of creativity and discovery.

That’s all to say that the series has rich if wonky source material to work with. Which is part of what makes it great and terrible at the same time. Delightfully dorky details from the books sometimes get sacrificed for plot momentum, detracting from the playful magic that propels the books. Instead, the series sets a very dramatic tone that often just fails to captivate.

Sadly, a big part of that falling flat comes down to our heroes, Diana Bishop (played by Teresa Palmer) and Matthew Clairmont (played by Matthew Goode). Right off the bat, I had a hard time believing that Palmer was the prodigious scholar who was already a tenured professor at Yale and visiting lecturer at Oxford when she first played the role at the age of 31 in 2018.

I mean, the math of stacking up this resume after a 5-8 year PhD program makes sense if this gal really took zero time between college and grad school, and then got immediately snapped up by Yale because she was just so brilliant. But… I mean…. I always envisioned Diana from the books as a bit older and less, um, Hollywood beautiful than Palmer. Bookish brunettes should be able to have vampire lovers, too! But, television casting of female leads, what can ya do.

Then there’s Goode as 1,000-plus year old vampire Matthew. Despite lacking a jawline, Goode is undeniably charming in most everything he does. This was true in Season 1, when Matthew and Diana were flirting and courting. Their chemistry at this point was pretty fun! And a certain boathouse scene was steamy in multiple senses of the word (there was sexual tension, and it was really cold out).

But as the relationship progressed, there became so much less playfulness. Matthew’s intriguing, devilish aloofness has given way to mumbly, bulgy-eyed intensity that is just pretty GAH. Calm down, Matt! Drink some blood and give Diana an orgasm, everything will be OK.

Basically, the chemistry between the leads has completely broken down, and it’s just made their relationship a somewhat laughable and therefore shaky foundation for the whole damn show. Everything is so SERIOUS all the time!

I mean, we can’t blame them. With a deranged and violent vampire on the loose, the governing body of witches, vampires, and demons breathing down their necks for their forbidden love, the fate of all creatures resting on their shoulders, and TWINS on the way, Diana and Matt are under a lot of pressure! But for some reason that means every conversation between these two takes place at either a yell or a world-weary whisper. Despite having a hot vampy husband and truly badass powers, Diana has basically become the Titanic “It’s been 84 years…” meme.

AND YET! I love it. Yes, this is partly because I’m a fan of the books, so it’s just a treat to see them play out on screen. I absolutely want to spend an hour per week descending into a world in which vampires are sophisticated academics, witches are slightly quirky matriarchs, and demons are the creative geniuses that enrich us all. This world rocks.

At the heart of it all is the mystery surrounding a centuries-old manuscript about alchemy that’s been hibernating in a library?! That connects supernatural beings across the centuries and the disciplines of literature and science?? Be still my little nerd heart, you had me at “The Bodleian.”

The show also adds to the books with the charm of its side characters. Give me more of vampire and former American Revolutionary War medic Marcus (Edward Bluemel) with his charismatic human girlfriend, auction house art expert Phoebe Taylor (Adelle Leonce), for goodness sake! The show lets us actually get to know badass Finnish witch Satu (Malin Buska), instead of just having her be an evil enemy like she is in the books.

Some of the modern details and side plots keep the show fresh, too. A Reddit-like forum for troubled demons to connect with each other is a smart answer to the plotline of increasing mental illness for the creative creatures. A whole high-tech lab dedicated to sequencing vampire, witch, and demon DNA to find out what makes creatures have powers is intriguing. And when ancient vampire Matthew drives off in his elegant Tesla? I die.

This mashup of the supernatural with the modern and academic worlds is enough to keep me watching for the show’s third and final season, even if the acting is mostly terrible and the plot is all A Bit Much. I’m rooting for you, Matt and Diana!

You can find A Discovery of Witches on AMC+ or on Amazon by subscribing to SundanceNow or Shudder.